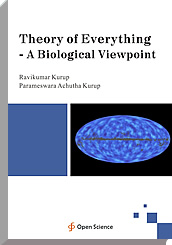 Introduction
Gravity would form the basis of consciousness. Perceptual synchronisation and focused attention would depend upon gravitational attraction which are ideal forces to create these two phenomena. The brain functions as a quantum computer and we sense the multitudinal quantal possibilities in the world. Porphyrions or supramolecular porphyrin arrays are extremophiles and can grow in extremes of temperature, space, gravity and antigravity situation. The dipolar archaeal magnetite and porphyrions in the setting of endogenous digoxin induced membrane sodium potassium ATPase inhibition can create a pumped phonon system mediating quantal perception. When one of the possibilities reaches one graviton criteria it reaches conscious perception. Gravity thus can be considered as a thought field or consciousness field permeating throughout the whole universe. Gravitational waves can form pressure waves which can create gravitational sounds. These thought sounds can undergo soni-luminescence creating photons and electromagnetic radiation the basis of the world of matter. Soni-luminescence can create matter out of gravitational sounds. Thus the thought field can create the matter. The cerebellum is the site of the unconscious brain. The cerebellum can be described as the part of the collective unconscious. Cerebellum is concerned with the tone of the antigravity muscles. The antigravity fields and waves are sensed by the cerebellum and constitute the unconscious. This led to the plausibility of gravity and antigravity wave sensing brain porphyrions mediating the functions of the conscious and unconscious brain.