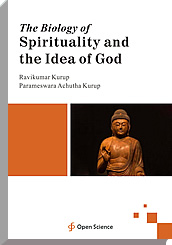 Introduction
The archaeal symbiosis due to global warming results in neanderthalisation of humans. Exposure to low level of EMF results in brain changes. This results in prefrontal cortex atrophy. The primitive brain areas of cerebellum and brain stem become hypertrophic. There is neanderthalisation of the brain and body. The conscious becomes minimal and unconscious brain takes over. The dominant extrasensory perception and quantal perception leads to appreciation of the vacancy of the universe and a sense of God. The vacancy consequent to quantal perception gives a feeling of perception of God. The God concept probably evolved out of this quantal perception. The information stored in the brain functioning as a quantal computer exists as multiple possibilities in multiverse universes. The extinction of one possibility in earth doesn’t foreclose the existence of the other possibilities in the quantal state in other universes. This leads to the concept of universal eternal existence, reincarnation and the illusory nature of death. There is eternal existence in the multiverse quantal universe. This leads onto an extreme spiritual society with a feeling of oneness generated by the collective unconscious consequent to quantal perception. The oneness is also shared with the environment contributing to eco-spirituality and environmental consciousness.