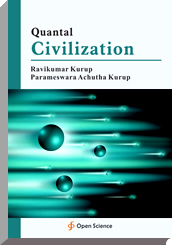 Introduction
The porphyrin arrays which can function as a supramolecular organism the self replicatory features called porphyrions. The porphyrins have got macroscopic wave particle existence. The porphyrin arrays can exist as quantal wave arrays as part of quantal form functioning as quantal computers capable of information storage and self replication. This could be a form of quantal life. Gravitational waves could form the basis of consciousness. Similarly, the human unconscious could be structured by anti-gravity. This led to the plausibility of antigravity and hypergravity sensing brain porphyrions mediating consciousness and the unconscious brain. The thought field of gravity functions as the universal observer and brings the particulate world of matter into existence. Gravitational waves can form pressure waves which can create gravitational sounds. These thought sounds can undergo soni-luminescence creating photons and electromagnetic radiation the basis of the world of matter. Thus the thought field of gravity and the matter is unified. Thought conscious and unconscious underlies the world of matter. The porphyrions or supramolecular porphyrin arrays can exist as a wave quantal computer in the gravitational field with the graviton acting as logic gate and as the ubiquitous observer. The global warming results in channelling of metabolism to porphyrin synthesis by induction of heme oxygenase activity. The human body gets converted into a colony of porphyrions which have a wave particle existence. The human body in its porphyrions incarnation especially in its wave form can disappear from existence. The human populations by this mechanism can get converted into a civilisation in the quantal world and live in multiple parallel universes for eternity.