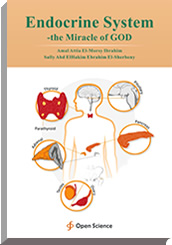 Introduction
This booklet introduces the brief information about the endocrine system in human body. This system represents a miracle from GOD in releasing, working and its final effect. Hormones are released into our blood in very small amounts. Timing of hormone release is often critical for normal function. This is especially true during fetal and plant development. Precise hormone control is important, as too much or too little at the wrong time can result in dysfunction of one or several body systems. Any adverse structural and/or functional changes to the endocrine system, which may result from exposure to chemicals, can harm human and animal growth, reproduction and development. This book contains also the organs that do not belong to the endocrine system, but at the same time the secret hormones.