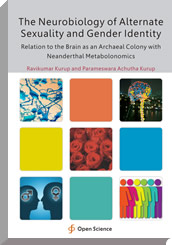 Introduction
The global warming produces extremes of temperature and accumulation of atmospheric carbon dioxide resulting in growth of symbiotic extremophiles like archaea. Archaea can induce dedifferentiation of somatic cells to stem cells which lose their function. The archaeal magnetite induces quantal extrasensory perception of low level of EMF. This results in low level of EMF effect on the brain producing cortical atrophy especially the prefrontal cortex. The primitive parts of the brain dominate with cerebellum and brain stem undergoing hypertrophy. The cortex has different hemispheric dominance in males and females. The right hemisphere is a creative hemisphere and is male. The left hemisphere is the practical hemisphere and is female. When the cortex atrophies the hemispheric differentiation and the effect on behavior is obliterated. The cortical effect on male and female behavior is lost. Behaviour becomes uniform and single and is dominated by the primitive brain stem and cerebellar cortex. This forms the basis of the androgynous state and alternate forms of sexuality.