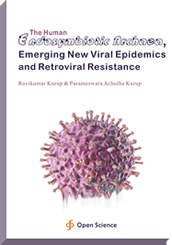 Introduction
Studies from our laboratory have shown that global warming and the low level EMF pollution results in increased endosymbiotic archaeal growth. The archaea can produce methanogenesis from hydrogen and carbon dioxide as well as from acetate. The human body methanogenesis can result in more global warming. Global warming is initially triggered by carbon dioxide and EMF pollution produced by homo sapien industrialization. It is carried forward by human endosymbiotic archaeal overgrowth and methanogenesis. The archaea can induce stem cell conversion and neanderthalisation of the human species. The archaea catabolises cholesterol generating digoxin which can modulate RNA editing and magnesium deficiency resulting in reverse transcriptase inhibition. The archaeal cholesterol catabolism can deplete the membrane rafts of the CD4 cell of cholesterol impeding the entry of the retrovirus into the cell. The archaea can produce permanent immune activation producing resistance to viral and bacterial infection. The archaeal cholesterol catabolism depletes tissue cholesterol producing vitamin D deficiency and immune activation. Thus archaeal overgrowth results in retroviral resistance and generation of the Neanderthal phenotype. The endosymbiotic archaea can secrete virus like RNA and DNA particles. The endosymbiotic archaea can induce uncoupling proteins inhibiting mitochondrial oxidative phosphorylation and generating ROS. The endosymbiotic archaeal magnetite can generate low level of EMF. The low level of EMF and ROS are genotoxic and produce breakages in hotspots of chromosome. It can also trigger rearrangements in hotspots of chromosome inhabited by retroviral and non-retroviral elements producing their expression. The archaeal secreted DNA and RNA viroids can recombine with the expressed retroviral, non-retroviral elements and other genomic segments of the human chromosome generating new RNA and DNA viruses. Thus the neanderthalised humans can serve as an origin for new RNA and DNA viruses as well as mutated retroviruses. The endosymbiotic archaea converts the Neanderthal cells to stem cells. The stem cells are resistant to immune attack. The stem cells can serve as a reservoir for this new RNA and DNA viruses. The stem cells and archaeal cells can also serve as a reservoir for viruses and bacteria belonging to other plants and animals. This helps to generate the species barrier jump in noted in recent emerging viral and bacterial infections.