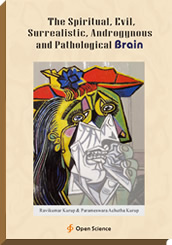 Introduction
The global warming produces increased acidity and atmospheric carbon dioxide resulting in extremophilic archaeal symbiosis in humans. The archaeal symbiosis results in neanderthalisation of humans. The archaea induced uncoupling proteins producing the primitive Warburg phenotype and stem cell metabolonomics. The archaeal metabolites of cholesterol digoxin, bile acids and short chain fatty acids induce uncoupling proteins. The lysosomal enzymes a marker of stem cell conversion are markedly increased along with genesis of the archaeal phenotype in metabolic syndrome x, degenerations, autoimmune diseases, cancer, schizophrenia and autism. In all these systemic diseases there is somatic cell transformation to stem cell and lose of function. The neurons become immature and lose their dendritic spines and connectivity. This results in loss of neuronal function and reversion to archaeal magnetite mediated extrasensory perception of low level of EMF. Exposure to low level of EMF results in brain changes. This results in prefrontal cortex atrophy. The primitive brain areas of cerebellum and brain stem become hypertrophic. The somatic and neuronal cell proliferates and there is neanderthalisation of the brain and body. The idea of goodness is based on reason and logic. Reason judgment and logic is a function of the cerebral cortex especially the prefrontal lobe. Prefrontal lobe function needs dynamic synaptic connectivity which is produced by jumping genes mediated by human endogenous retroviral sequences. Goodness is correlated with heaven. The idea of evil is based on the unconscious and the impulsive behavior related to subcortical areas especially the cerebellum. The cerebellum is the site of impulsive behavior and the unconscious behavior. The cerebellar and subcortical brain connections are predominantly archaeal colony networks. The idea of evil is related to hell. The idea of conscious judgmental acts and unconscious impulsive acts, heaven and hell, goodness and evil are juxtapositions. The global warming and exposure to low level of EMF leads to actinidic archaeal growth in the brain and increased archaeal magnetite mediated perception of low level of EMF. This leads to prefrontal cortex atrophy and cerebellar dominance. The conscious becomes minimal and unconscious brain takes over. The study assessed archaeal growth as assessed by cytochrome F420 activity and stem cell type metabolonomics in systemic diseases, neuropsychiatric disorders and normal individuals with differing psychological profile- prisoners, spiritual, creative individuals and common sense modulated business men.

The archaeal induced stem cell syndrome or neanderthalisation is due to global warming and acid rains resulting in increased extremophilic archaeal symbiosis. The archaea catabolises cholesterol and generates digoxin, bile acids and short chain fatty acids which produce induction of uncoupling proteins. This produces mitochondrial dysfunction and the cell obtains its energetics from glycolysis. Archeal digoxin produces membrane sodium potassium ATPase inhibition which also contributes to stem cell conversion. The whole body somatic and brain undergoes stem cell conversion and becomes a stem cell phenotype with Warburg metaolic phenotype. The generalized acidity due to global warming and increased atmospheric carbon dioxide also facilitates archaeal growth and stem cell transformation. The acidic pH due to the Warburg phenotype and increased atmospheric carbon dioxide also results in stem cell conversion. The somatic differentiated cell getting converted to stem cells lose their function and become dysfunctional metabolically, neurologically, immunologically and endocrine-wise. This produces the epidemic Benjamin button syndrome and the human species becomes neanderthalic and a collection of immature stem cells. This results in epidemic metabolic syndrome x, degenerations, cancer, autoimmune disease, autism and schizophrenia. The brain becomes converted to a collection of stem cells which are dedifferentiated with loss of function and is like an archaeal colony network. The perception becomes extrasensory and quantal depending on archaeal magnetite. The increased amount of low level EMF perception results in prefrontal cortical atrophy. It also produces cerebellar hypertrophy and the cerebellar cognitive function takes over. This also results in societal changes where evil and spirituality dominates. The world of the logical civil society of the Christian world comes to end and paganistic behavior takes over. The society becomes selfish and dominated by impulsive consumerism and acquisitive capitalism. The world becomes cruel, violent, aggressive and terroristic. Art becomes chaotic and abstract in line with the senses and unconscious. There is a predominance of obsessive and alternate sexuality. Criminal behavior and cruelty dominates. The world is impulsive psychopathic, creative autistic with features of idiotic savants, ritualistic, chaotic, sexual, ugly, anarchic, violent, evil, paganistic, obscene, atheistically spiritual as well as selfish. It mimics the Niezteschean world, the deconstructed world of Derrida, the surrealistic world of Bataille and the nihilistic, anarchic world. There is the death of the individual and life becomes a social value. It is an acephalistic world of Freud and Jung. The art is abstract, the literature is magically real, the music is rock and the dance chaotic. All these results from the extinction of rationality and the dominance of primitive impulsive behavior. A civilization of the senses dominated by the unconscious takes over. The will to goodness given by the cerebral cortex is lost. This results in development of a new homo neoneanderthal human species with its dominant evilly spiritual cerebellar brain. It produces a surrealistic evil brain with realm of the senses, archetypes, evil spirituality and impulsiveness taking over. It is a kingdom of the collective unconscious and selfish capitalism with the will to power and the realm of the senses.