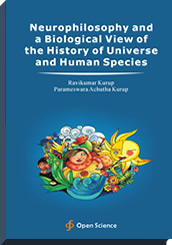 Introduction
The interstellar space is filled with star dust which is postulated to be of biological origin. Fred Hoyle in his hypothesis of the life cloud has put forward an extra terrestial origin for life on earth. The existence of an extra terrestial force controlling the genesis and evolution of life on earth has been put forward by many authors. The biocosm theory postulates that the conditions in the universe have been so adjusted to make it possible for life to exist on earth and the universe. This leads to the postulate that the universe exists and reproduces because of life which acts as a quantal observer.

This book deals with the role of extremophilic archaea and RNA viroids extruded from the archaeal cells as primitive anthropomorphic observers making it possible for the universe to exists and evolve. The study showed that the matrilineal species of neanderthalic origin had more of archaeal symbiosis while the homo sapien species had more of RNA viroidal symbiosis. The Frohlich model of quantal brain function postulates the existence of Bose-Einstein condensates in the brain at normal temperature. There are dipolar magnetite and porphyrin molecules in the brain which in the context of membrane sodium potassium ATPase inhibition can lead onto a pumped phonon system producing Bose-Einstein condensate and bosons in the brain. This boson can become unstable leading onto catastrophic vacuum collapse and the possible extinction of the universe. The Frohlich model of Bose-Einstein condensate formed of magnetic dipolar porphyrins and archaeal magnetite in cellular lipid emulsions can interact with photons generating black holes. This black hole can collapse to singularity. But the collapse happens only upto a particular point following which the density or singularity undergoes a rebounce producing a new universe with a new set of universal constants. Thus the quantal model of brain function can lead onto the destruction and reproduction of universes. The brain can be considered to be a multicellular quantal computing archaeal network in the case of homo neanderthalis. The synaptic networks of the brain parallel the galactic networks of the universe. The brain functions as the universal quantal computer and anthropomorphic observer creating and destroying as well as reproducing universes. This occurs to a lesser extent in the homo sapien brain. The quantal wave form or the Higgs field gives mass and energy to the particles like protons, neutrons and electrons when it interacts with it. The quantal wave forms can generate porphyrins. Porphyrins can have a macromolecular and wave existence which is interconvertible. The porphyrin arrays can self organize and self reproduce. The macromolecular porphyrin arrays would have functioned as intelligent organisms in the interstellar space. The iron porphyrins can undergo photooxidation and generate a magnetic field. The photonic interaction with the magnetic porphyrins can generate black holes which can collapse to a point before singular density. At this point of time it can undergo rebounce producing new universes. The porphyrin organism with its quantal computing function served as the initial anthropomorphic observer or the lotus of Brahma. The porphyrins would have formed a template for RNA viroids and prions to form. This would have generated primitive archaeal forms. The primitive archaeal cell can extrude RNA viroids generating RNA viroidal clouds. The intergalactic magnetic field generated by the archaea and magnetic porphyrin organism would have contributed to the evolution of star systems and galaxies. The archaeal clouds and RNA viroidal clouds would have served as interstellar intelligence guiding the formation of star systems and galaxies and also functioning as anthropomorphic observers. The meteoritic impacts would have transferred the archaeal and RNA viroidal colonies to earth. They would have self organized into plant and animal species as well as homo sapien and homo neanderthalic species. The homo neanderthalic species are archaeal dominant. The homo sapien species are RNA viroidal dominant. The human race is divided into two species homo sapiens and homo neanderthalis.