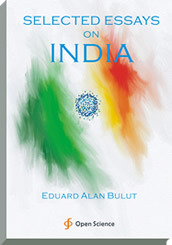 Introduction
The book is composed of three different essays about the state, political and cultural affairs of India. Primary resources are used as much as possible for the analysis and discussions in this book.

The first essay is about Gandhi’s first work, with which he went into politics. It was a manual for swaraj , i.e. independence. I thought it would be interesting to discuss this work because this manual does not talk about a real, but imaginary world order. The second essay is about the relationship/problems between the Indian intellectuals and the early Christian missionaries during the colonisation period. I find this topic very interesting because India is a country which remained under the British rule for a long time. Despite that, the level of Christianity remained low. How did they do this? Their defence of Hinduism and Hindu doctrines is a part of this answer. The last part is about the politicisation of the scheduled castes, tribes and backward groups. I think this politicisation process and its contribution to the largest democracy in the world is important.

The book has been revised by an Indian professor and two independent editors. There may be some cosmetic errors, though it was checked over and over. I do apologise, in advance, for these errors, if any. In addition, I paid great attention to make the points as clear as possible. However, due to some limitations and pressures, there may be some points that are not clear enough. Or, I might have thought that further explanation was not necessary. In such cases, readers’ reactions may contribute significantly to make them clear and understandable, and, therefore, better. Your reactions are always appreciated.

Author(s)
Eduard Alan Bulut
Eduard Alan Bulut is a political scientist and researcher. He was born in 1984 and earned his BA degree at Hacettepe University, Ankara, Turkey. He earned his MSc degree at the Middle East Technical University (METU) in Ankara. He studied Asian Studies under the majors of International Relations and Sociology. Graduated as the top-ranking student from the METU, he continued with his PhD studies in Political Science and International Relations at Istanbul Fatih University, Turkey. For his dissertation about political economy, he focused on the role of capital mobility and economic inequality in ruling elite’s actions in wealthy dictatorships.

Some of his works include a book (2015. Minorities in Constitution Making: A Case Study from Turkey. Cambridge: Cambridge Scholars Publishing), a book chapter (2012. “A Focus on Greek Christian Community in Turkey: A Frightened Society and Deep-rooted Institution under Crucifixion.” In Current Issues in Sociology: Work and Minorities, edited by Gregory A. Katsas, 177-187. Athens: Athens Institute for Education and Research), another book chapter (2012. “Ideas of Europe and European Union in Turkey.” In Ideas of/for Europe: An Interdisciplinary Approach to European Identity, edited by Teresa Pinheiro, Beata Cieszynska and José Eduardo Franco, 285-296. Frankfurt am Main: Peter Lang Publishing) and a journal article (2014. “Historicising Habermas’s Public Sphere: Conceptual Distinction between the Public Spheres of Habermas and Turkey.” American Journal of Social Sciences. Vol. 2, No 6, pp 152-165) and another journal article (2012. “Community-Building in ASEAN? A Theoretical Approach to Regional Institutionalisation in Southeast Asia.” Turkish Journal of Politics no. 3 (1): 53-66).”

Currently, he is busy with his doctoral research about political economy and authoritarianism. In addition, he is working on a book project, a case-study, about the Jewish population of Samsun, Turkey. To this end, he has been running research on a group of Russian stowaway Ashkenazi Jews, from which his patrilineal descendants come. As a part of this project, he is reviewing the archival records in Ottoman Turkish, Greek and Hebrew.
Readership: Scholars and students from social sciences.

Readership
Scholars and students from social sciences.
CONTACT US