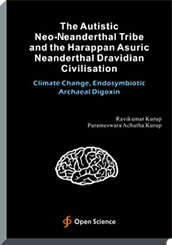 Introduction
The increased prevalence of autism in the Dravidian Nair community has been documented. Autistic children and the Nair population tend to have Neanderthal anthropometric features. There is increased incidence of EMF, CCP, MNG and mucoid angiopathy in the population inhabiting the land masses arising out of the Lemurian supercontinent in the Indian ocean. The South Indian land mass was a part of the Lemurian supercontinent in the Indian and Southern ocean which was destroyed by giant Tsunamis and the population inhabiting the supercontinent are represented by the Dravidian population of South India. The population that migrated from the Lemurian land mass travelled over to the Eurasian land mass creating the urban civilizations of Harappa-Mohenjadaro, Sumeria, Etruscia, basque, celts and Egypt. All these ancient civilizations were co-terminus and existed at the same point of time at least 10,000 years BC. The Harappa-Mohenjadaro civilization is considered to be Dravidian and the Harappan script has been decoded and found to be Akkadian-Dravidian. All the Harappa-Mohenjadaro, Sumeria, Etruscia, basque, celts and Egypt civilizations spoke the Akkadian-Dravidian language. As has been demonstrated the Dravidian Nair community has Neanderthal anthropometric features and Neanderthal metabolonomics. All the above mentioned civilizations have a possible Neanderthal origin. The Dravidian community is postulated to have evolved in the Lemurian continent.

The homo neanderthalis would have evolved in the Lemurian supercontinent in the Indian and Southern ocean during periods of extremes of weather. During the ice age and periods of global warming, there is increasing growth of the extremophilic archaea in the human body and oceanic ecosystems. The increasing growth of archaea in the ocean bed leads to release of methane which triggers catastrophic earthquakes in the oceans. This precipitates Tsunamis in the Indian ocean and one of them would have destroyed the Lemurian land mass triggering a mass exodus. This would be the basis of the flood myths in history. The increasing growth of cholesterol catabolising archaea in the primates leads to evolution of homo neanderthalis. The archaea binds to the toll receptor inducing HIF alpha suppressing mitochondrial function and increasing glycolysis. The archaeal catabolism of cholesterol produces cholesterol depletion and bile acid deficiency. Both these factors induce the metabolic syndrome and insulin resistance leading to trunkal obesity and the Neanderthal phenotype. The low cholesterol levels leads to vitamin D deficiency and rickets generating the Neanderthal phenotype with the characteristic anthropometric features. The cholesterol catabolism and ring oxidation leads to generation of pyruvate which is transferred to the GABA shunt pathway. This generates glycine and succinyl CoA synthesizing porphyrins which are dipolar molecules. The cholesterol catabolism generates digoxin which inhibits membrane sodium potassium ATPase and produces a Bose-Einstein condensate via the dipolar porphyrins inducing quantal perception. The digoxin induced membrane sodium potassium ATPase inhibition depletes the cell of magnesium inhibiting reverse transcriptase activity and HERV generation. The HERV produces genomic flexibility and lack of it leads to prefrontal cortex atrophy. The porphyrin induced quantal perception of low level EMF also leading to prefrontal cortex atrophy. There is cerebellar dominance in the Neanderthal phenotype leading onto increased intuitiveness, quantal perception, spirituality, community spirit, compassion, equality and feeling of oneness with the environment. Thus the Neanderthal phenotype would have evolved in the Lemurian continent with its attached antartic land mass in the ice age. The Neanderthals would evolve due to similar mechanism during period of global warming. The evolution near the antartic part of the Lemuria and the decreasing availability of sunlight would have contributed to the light skin colour of Neanderthals. The Neanderthals following destruction of the Lemurian supercontinent would have migrated to Harappa-Mohenjadaro, Sumeria, Etruscia, basque, celts and Egypt creating a global Dravidian civilization. This civilization had a language, was spiritual, had gender equality and social equality. It was also a creative urban civilization in Harappa-Mohenjadaro, Sumeria, Etruscia, basque, celts and Egypt.

In the present situation of global warming there is an increased growth of archaea in the human system and neanderthalisation of humans. The Neanderthals have returned and the human brain is becoming neanderthalic in behavior and function. This is responsible for the rising tide of autism, schizophrenia and metabolic syndrome X in the world.